Our Christmas tree recycling shoreline protection project is currently in its 30th year and going strong diverting hundreds of thousands of Christmas trees from the Jefferson Parish Landfill to the rich wetland habitat within the Barataria Basin. Recycled trees are used to build wave dampening fences and to fill in man-made canals to help reduce coastal erosion and reestablish the natural hydrology of the area. Since its inception, more than 15,500 linear feet of shoreline wave dampening fences have been constructed and six abandoned oil and gas canals have been filled near the town of Jean Lafitte. Additionally, we utilize our Christmas tree recycling project to increase public awareness of wetland losses, solid waste issues, and conservation of our natural resources.

Click the PDF below to see a map of our current tree fences and adjacent shoreline changes. 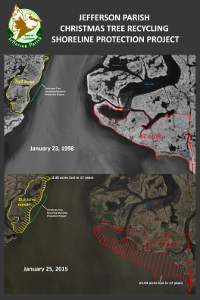